Preliminary Study on the Autopilot Chip Pattern: NVIDIA leads the industry, and Huawei is expected to become an important role

Preliminary study on the pattern of autonomous driving chips: Nvidia leads the industry, and Huawei is expected to become an important role 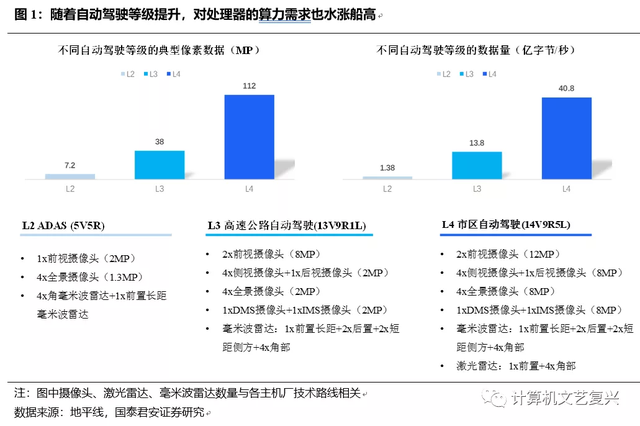 Nvidia (NVDA.US) leads autonomous driving chips, and several giants have their own strengths
At present, the main players of autopilot chips can be roughly divided into three categories.
The first category is an open platform that can provide high computing power, mainly Qualcomm (QCOM.US) and Nvidia. This type of player has a very rich software ecosystem. In addition, it also includes a semi-universal state. The software ecosystem is weaker than Qualcomm and Nvidia. Huawei, Xilinx (XLNX.US), etc.
The second type of players are mainly traditional automotive semiconductor giants, mainly including Renesas, Infineon, NXP (NXPI.US), Texas Instruments (TXN.US), STMicroelectronics (STM.US), etc. After Nvidia, Huawei and other manufacturers entered the game, such players have been affected to a certain extent, but they have not completely given up on autonomous driving. For example, Renesas is the fastest in this type of player in terms of autonomous driving chips. Its ASIL-D-level system-on-chip R-Car V3U for ADAS and AD has reached 60Tops in computing power, which is comparable to Qualcomm's Ride platform. The same, but the mass production time node may be later.
The third type of players’ self-developed artificial intelligence ASIC chips, mainly including Tesla, Mobileye, and domestic horizon, black sesame, etc., in addition to Tesla’s self-developed chips used in their own FSD systems, other manufacturers often external Provide a full-stack solution with software and hardware coupling.

Nvidia is currently the leader in autonomous driving chips. At present, many car companies have chosen Nvidia chips for many reasons:
NVIDIA built a unified GPU hardware architecture and CUDA software architecture around the car, desktop, and cloud, and has strong computing power in artificial intelligence high-performance computing. Nvidia is the only company in the industry capable of providing a unified architecture and a unified software development environment for the desktop, cloud and vehicle terminals. On the car side, NVIDIA has built an end-to-end platform that can provide solutions covering sensors, domain controllers, and data acquisition software; on the desktop side, companies that do autonomous driving often buy Intel CPUs and NVIDIA game cards ; In the cloud, CUDA and a series of artificial intelligence SDK can not bypass Nvidia, and the advantages of image processing and other aspects can help Nvidia's simulation platform to maintain competitiveness. The full-stack capability guarantees Nvidia’s strong ecosystem, because the software platforms of all products on the car, desktop, and cloud are the same. Autopilot software developed in the cloud can run on the desktop and car without modification. , Saving the amount of code modification. At the same time, Nvidia is taking the GPU route, and the development process is relatively easy, and there is no need to make additional adjustments to the hardware; and the main opponents are mostly ASIC solutions, the entire tool chain is not very mature, and it is not particularly friendly to developers. 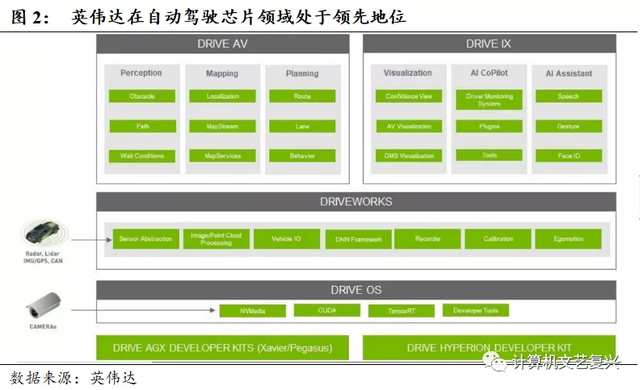 Nvidia entered the autonomous driving market earlier and is ahead of its major competitors in progress. In April 2021, Nvidia released a new generation of SoC-Atlan, a single SoC computing power can reach 1000TOPS, it is expected to provide samples to developers in 2023, and a large number of vehicles will be installed in 2025. At present, Nvidia's autopilot chips are two generations ahead of its main competitors, which is almost two years behind the cycle. The first-mover advantage is an important advantage of NVIDIA, because for the OEM, once a platform is selected, the subsequent migration cost is relatively high. The neural network itself needs a lot of tuning. It has a relatively high degree of coupling with the hardware. It may be difficult to adjust to a better effect on a certain hardware. If you change a set of hardware, some of them need to be re-tuned; and now The tool chain is not very mature, and the adjustment process may be more painful.
We expect Qualcomm will also be one of the players at the final table. At present, Qualcomm has at least several advantages:
The advantage of cost performance. From a cost point of view, Qualcomm is the leader in consumer chips and cockpit chips. The migration of consumer chips and cockpit chips to autonomous driving chips can save Qualcomm a certain amount of cost. For example, Qualcomm's first-generation Ride platform uses two cockpit chips plus an ASIL-D car-level autopilot chip for redundancy. From the power consumption point of view, the protagonist of parallel computing in Qualcomm's important rival NVIDIA chip is GPU. When doing some common neural network models, the efficiency is not as good as ASIC, so the energy efficiency ratio of NVIDIA's autonomous driving chip is weaker ( Of course, NVIDIA is also aware of the weaknesses of the GPU, and there is also a deep learning acceleration engine implemented by the ASIC architecture on the chip). 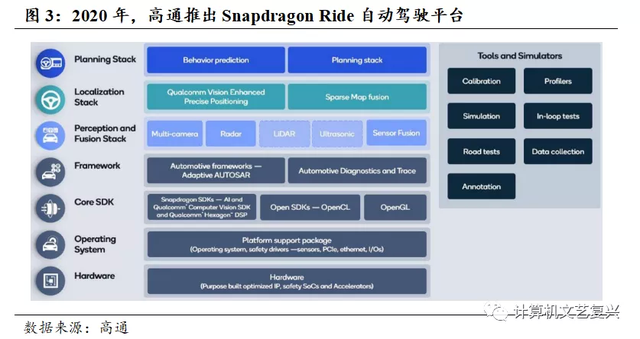 Tesla (TSLA.US) is a relatively closed ecosystem. After parting ways with Mobileye and NVIDIA, Tesla launched its self-developed FSD chip in April 2019. The research and development of the FSD chip started in 2017, and it took 18 months from design to mass production. It was officially applied to Model 3 in April 2019. There are two chips on the same board, and each chip has a computing power of 72 TOPS. During the driving process, the two chips analyze the same data at the same time, and compare the analysis results to verify each other and improve the safety of autonomous driving.

High-speed image processing: 1) In terms of data transmission, the data transmission speed of the image processor SIP of the FSD system reaches 2.5 billion pixels per second, which is far greater than the amount of data collected by 8 cameras; 2) In terms of data processing The maximum processing speed of the image processor ISP built into the FSD chip is 1 billion pixels/second, which has reached the fastest consumer-grade video transmission DP1.4 standard. In general, the car chip will lag behind the consumer-grade chip. of;
SRAM: The main function of ISP is to convert the original three primary color data generated by the camera into complex image information, which will be stored in SRAM before entering the NPU for further processing. According to Pete Bannon, the chief engineer of Tesla's chip, the cache bandwidth for fully automatic driving must reach at least 1TB/sec, while the bandwidth of the FSD chip SRAM reaches 2TB/sec.

Huawei is expected to become a very important force in the field of autonomous driving. Huawei's self-developed Yueying operating system is compatible with LINUX, and can achieve QNX's microkernel and low latency. In this way, it can actually reduce the migration of many algorithms originally developed under the LINUX framework to this car-level mass production operation. The difficulty of software migration on the system. At the same time, Huawei is also the only sensor manufacturer among the chip giants, and both lidar and millimeter wave radar are self-developed. 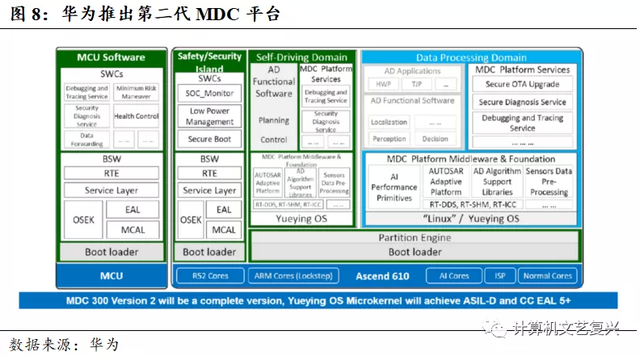