News information
Home › News information › After 4 years of investment of more than 50 billion yuan, Evergrande's first car was off the assembly line, and the progress surpassed Jia Yueting's FF?

After 4 years of investment of more than 50 billion yuan, Evergrande's first car was off the assembly line, and the progress surpassed Jia Yueting's FF?

The official public account of Hengchi Automobile released a related video about the assembly line of Hengchi 5. It can be seen from the video that the automation level of the existing production line of Hengchi 5 is very high. The assembly, welding, painting and other processes are all performed by the production line. The robot is done.
Evergrande Auto's "strongest circle of friends"
Evergrande has almost implemented Xu Jiayin's personal car-building policy, which is to buy, combine, and circle. Buy refers to the core technology that can be bought, and the company that can buy it; Co-integration refers to the comprehensive cooperation with related companies if the technology cannot be bought; Circle refers to the field of automotive engineering technology, modeling design, and parts supply chain. Establish a strong circle of friends and sign strategic cooperation agreements with leading companies. These are the three core elements of Evergrande's car manufacturing.

Evergrande has made a number of mergers and acquisitions since announcing its car manufacturing in June 2018, including the acquisition of Guoneng Electric Vehicle Sweden Co., Ltd. (NEVS) to obtain a car-building qualification. On January 15, 2019, Evergrande Health announced the acquisition of Mini Minor Limited and its 51% stake in NEVS at a total consideration of US$930 million. Since then, Evergrande Health has continued to buy NEVS through Mini Minor. On June 11, 2019 On the same day, Evergrande Health announced that Mini Minor and National Modern entered into an equity sale and purchase agreement, and Mini Minor acquired the remaining equity of NEVS for US$379.5 million. Prior to this, Evergrande Health had indirectly held 82.4% of NEVS, and NEVS mastered the core technology of Sweden's Saab Automobile and possessed the world's leading forward R&D capabilities for advanced new energy vehicles. 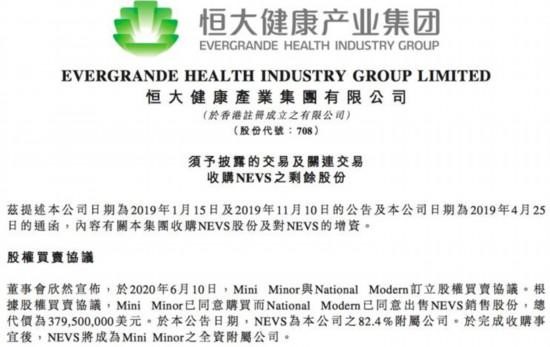 In order to acquire ternary lithium electronic technology, Evergrande also spent 1.06 billion yuan to acquire a 58.07% stake in Shanghai Carneg New Energy Co., Ltd., which ranks among the top three domestic power battery soft pack businesses. Subsequently, he purchased the shares of the Dutch E-Traction Company, which has the most advanced in-wheel motor technology in the world. Of course, it can be seen from the picture below of the production line of Hengchi 5 that Evergrande is not only willing to invest in core technologies, but also strives to lead in the construction of production lines. It is reported that Evergrande has built a total of 10 production bases across the country. The configuration is based on the "Industry 4.0 standard", and it has purchased advanced equipment including Siemens, Schuler, KUKA, ABB, Fanuc and other companies, and the automation level is quite high. 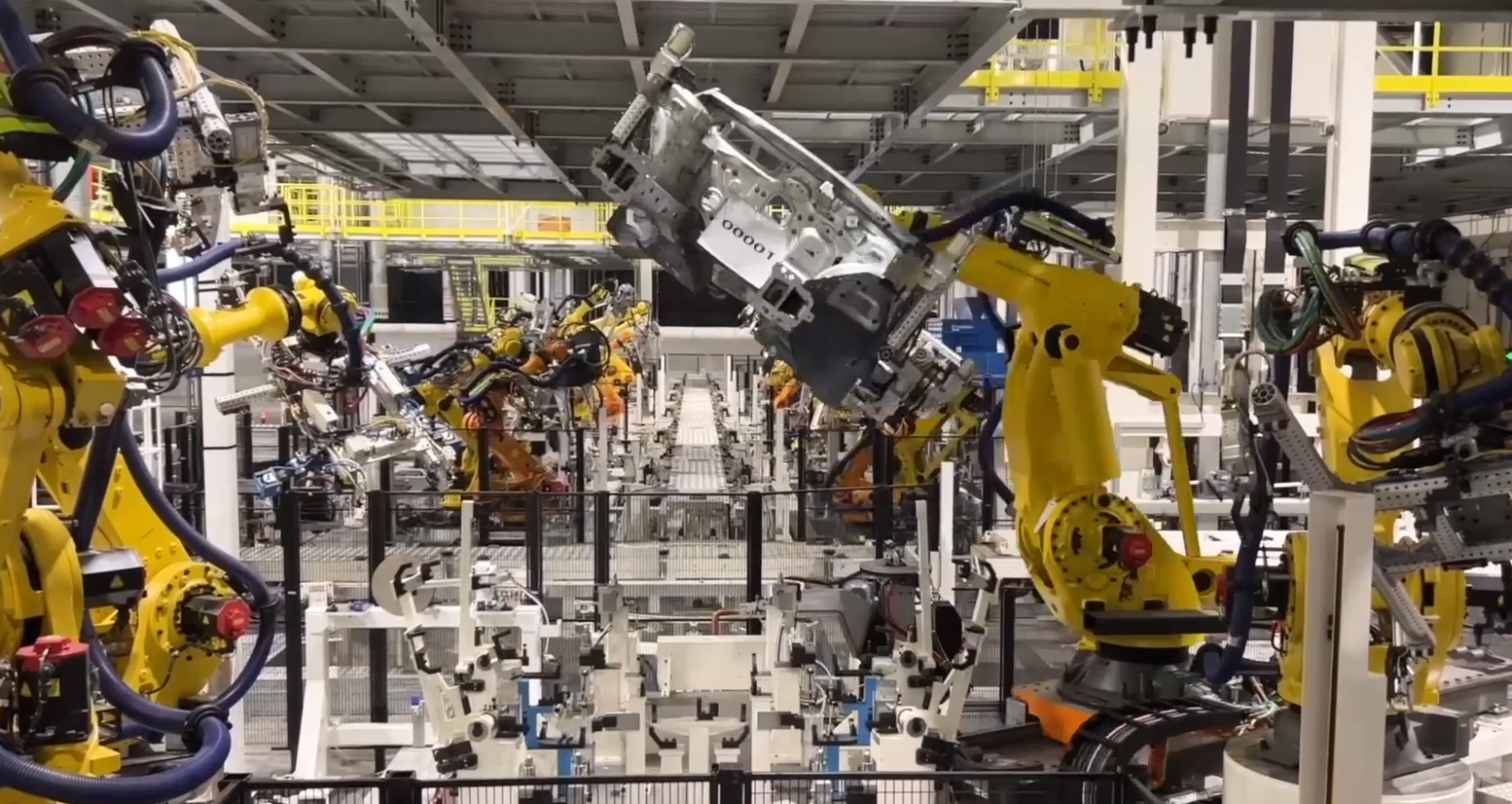 In terms of cooperation, the most representative is that Evergrande and the world's top supercar manufacturer Koenigsegg established a joint venture and launched a new energy supercar called Gemera. In addition, Evergrande also jointly developed L4 global autonomous driving technology with Aptiv and Bosch, and developed the H-SMART OS intelligent networking system with Tencent and Baidu.

As can be seen from the Evergrande Auto section of Evergrande’s official website, Evergrande Auto has accumulated a powerful circle of friends in the automobile industry chain. The design of Hengchi Auto is derived from the sincerity of 15 global top styling design masters and the Evergrande Auto team. cooperate. Hengchi Automobile currently plans a total of 14 models, and this is the result of the research and development cooperation between Evergrande and the global automotive engineering technology leader.

Relatively speaking, since its establishment, Evergrande Auto has only recently caused people to worry about its financial problems due to the reasons of Evergrande Group. In addition, Evergrande Auto is a car manufacturer with “good money” in other periods. As a new force, he quickly met a powerful circle of friends in the auto industry chain ecosystem.
Hengchi 5 takes the lead
On August 3, 2020, Evergrande Motors released 6 models of Hengchi brand in Shanghai and Guangzhou simultaneously, namely the current Hengchi 1 to Hengchi 6, realizing sedan, coupe, SUV, MPV, Full coverage of crossovers. Hengchi 7 to Hengchi 9 are later planned models. 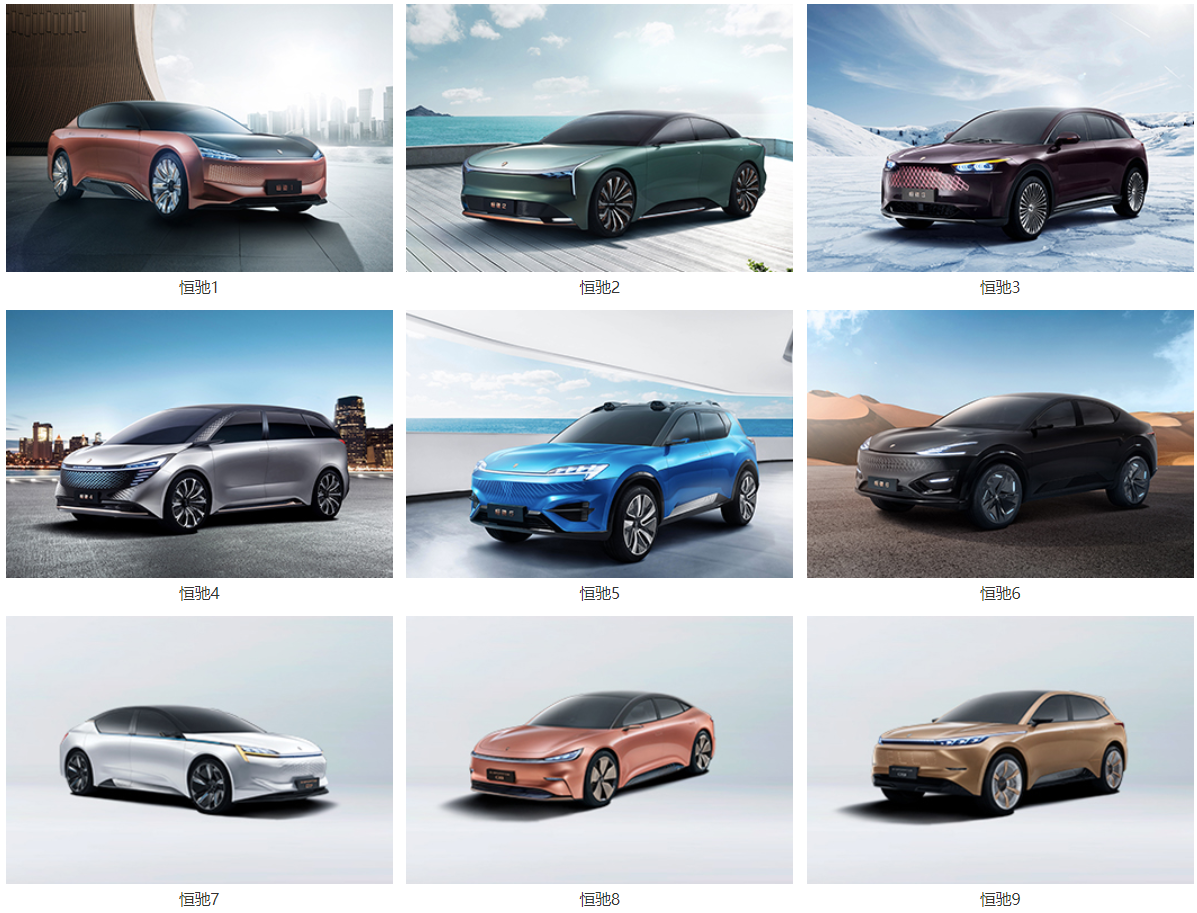 The design teams of the six models from Hengchi 1 to Hengchi 6 are very eye-catching. We mentioned above that 15 of the world's top car design masters participated in the design of these six models, including the former Audi design director Walter De Sliva, the former BMW Chief Designer Andres Warming. We are familiar with the world's top auto parts suppliers, including Bosch, Denso, ZF, Magna, Continental, etc., are also involved in the parts supply of these models.

Hengchi 5 is the first model launched by Evergrande. On February 3, 2021, Hengchi Automobile announced that the Hengchi 5, the first pure electric SUV model of Hengchi Automobile, will operate in a temperature range of -36°C in Inner Mongolia. Keshi started the winter endurance test calibration. The winter test is a key node before the mass production of new energy vehicles. Generally, the car will be released 6-12 months after the winter test.

During the 2021 Shanghai Auto Show, Evergrande also invited professional media from the automotive industry to test drive the Hengchi 5. This compact SUV has a body size of 4725/1925/1688mm and a wheelbase of 2780mm. With a sense of modern technology, it can be seen from the video of Hengchi that the model has several colors of blue, black, yellow and white, and adopts H-type through-type LED headlights. As can be seen from the picture below, the front face of Hengchi 5 is highly recognizable, especially the headlights. 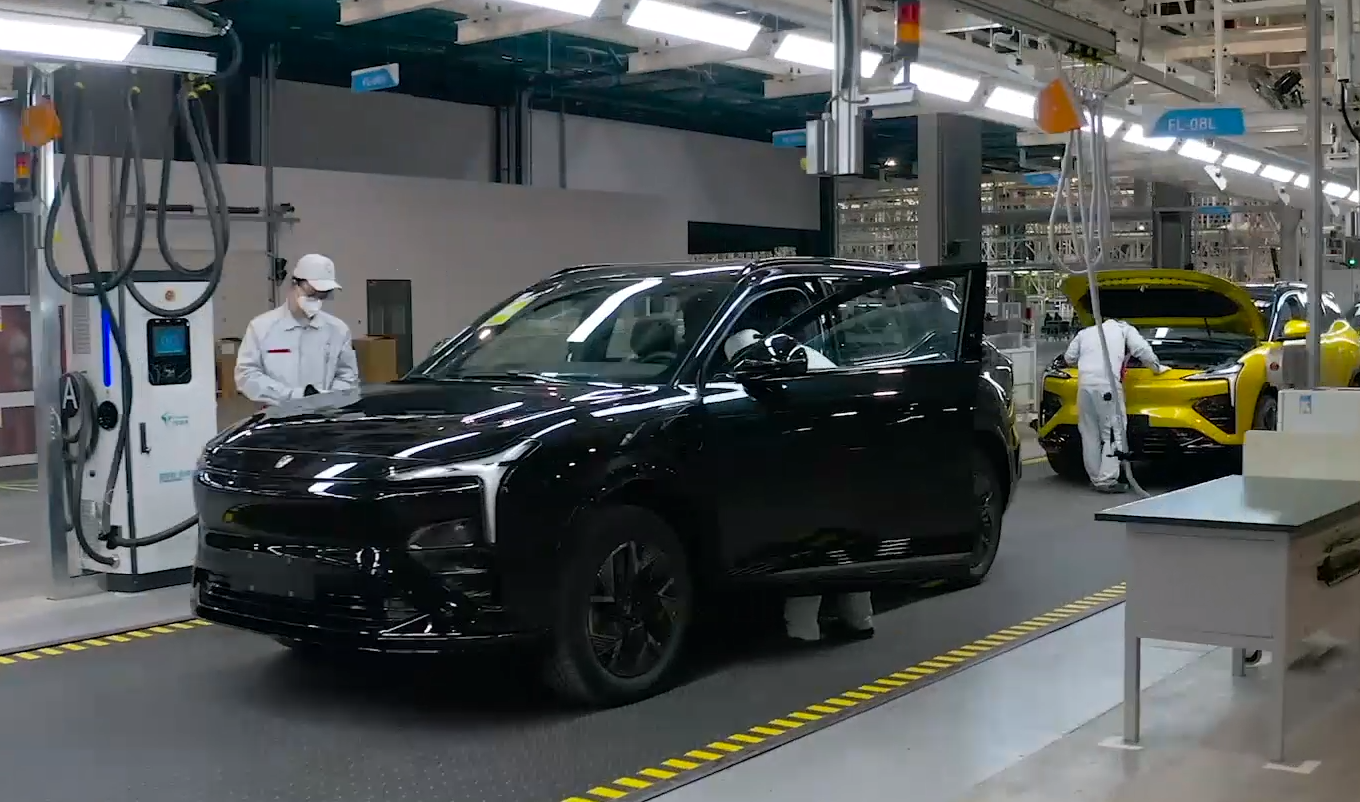 In fact, on November 9, 2021, Hengchi 5 appeared in the Ministry of Industry and Information Technology. According to the data reported by the Ministry of Industry and Information Technology, the maximum speed of Hengchi 5 is 180km/h, the engine is TZ210XS051 of United Automotive Electronics Co., Ltd., the peak power is 150kw, the rated power is 60kW, and the NEDC cruising range exceeds 700 kilometers. Other technical details show that the ABS controller model/manufacturer is ESP9/Bosch Auto Parts (Suzhou) Co., Ltd. and uses lithium iron phosphate batteries.

In addition to Hengchi 5, according to reports, Hengchi 1, Hengchi 3, Hengchi 6, and Hengchi 7 trial-produced cars have also been rolled off the production line. At present, Evergrande Group is in deep debt crisis, and the official announcement of Hengchi 5 off the assembly line will undoubtedly give a boost to the development of the group's auto business.
Progress ahead of Jia Yueting FF?
We are all used to defining Hengchi Auto as the second stage of Evergrande, and the first stage is the cooperation between Evergrande and Jia Yueting.

On June 25, 2018, Evergrande Health announced to acquire 100% equity of Hong Kong Shiying Company at a price of 6.746 billion yuan, and indirectly obtained 45% equity of Smart King Company, which is Jia Yueting and FF's original shareholders and Shiying. A joint venture company established by the company.

Soon after, Xu Jiayin also personally went to the United States to inspect FF's American factories, and highly praised Jia Yueting and FF. However, the "honeymoon period" between Evergrande and Jia Yueting soon ended. On October 3, 2018, Jia Yueting suddenly filed an arbitration with the Hong Kong International Arbitration Center in the name of Smart King, demanding the expulsion of Evergrande, the company's major shareholder. Then the two sides launched a war of words, and there were incidents such as Evergrande stopping the payment of FF Chinese employees’ wages, and FF driving away Evergrande’s financial staff.

Since then, Evergrande and Jia Yueting FF have gone their separate ways. In December 2021, foreign media reported that the welding production line equipment of the FF automobile factory has been successfully shipped, and the FF91 is one step closer to mass production, and it has been more than three years since the first FF91 pre-production car came off the assembly line. the normal cycle of the industry.

Now the first car of Hengchi 5 is off the assembly line, and from the perspective of the production line, it should not be far from the official mass production, and the FF91 equipment needs to be debugged when it arrives.