News information
Home › News information › Chip industry salary chaos! With an annual salary of 6 million and the applicant becoming Party A, what is the end of the talent war?

Chip industry salary chaos! With an annual salary of 6 million and the applicant becoming Party A, what is the end of the talent war?

Chip industry salary chaos! With an annual salary of 6 million and the applicant becoming Party A, what is the end of the talent war?
chip industry
At the end of 2021, after Apple and Meta launched a “people-robbing war” in the metaverse field, Intel also implemented a structural major salary adjustment in early 2022, and plans to recruit talents from the seven major chip and system factories. The battle for people in the semiconductor industry officially kicked off from the "mutual pinch" of international manufacturers.
Not only major international manufacturers, domestic semiconductor companies, and even auto companies are all sticking back and forth between "robbing people" and "poaching people". According to Career International data, the current annual salary of chip design engineers is between 600,000 and 1.2 million yuan, the current annual salary of verification engineers is between 600,000 and 1.5 million yuan, and the current annual salary of CPU/GPU leaders is between 1.5 million and 6 million yuan. Yuan, the salary increase for job-hopping is 20%-50%.
The talent war has intensified, salaries have become higher, and the threshold has become lower. What are the advantages and disadvantages of the semiconductor industry? ERIC, a senior headhunter of a company, believes that the entire semiconductor industry is now in a very "impetuous" state. India has also become another choice for many companies when big international companies face difficulties in recruiting people at home.
Intel locks seven chip companies to grab people, or involves Taiwanese companies
Starting from 2021, the semiconductor industry will not only be short of chips, but also face a shortage of chip talents. In the context of the continuous development of the semiconductor industry, digital front-end, analog chip design, FAE/AE, etc. are the most popular and in short supply positions. As a result, high-paying recruitment, "poaching" and job-hopping have become popular keywords in the semiconductor industry in 2021. In terms of talent shortage, the situation faced by foreign and domestic enterprises is the same.
According to Taiwanese media reports, Intel will make a structural salary increase in the form of cash and stock in 2022, the amount may exceed 2 billion US dollars. In addition, by successfully recommending female talents and male talents, they will also receive bonuses to varying degrees, and the amount is expected to range from NT$80,000; if the talents of the seven major chip companies that are successfully recommended and locked, can receive a bonus of up to 240,000 yuan.
Why Intel spends a lot of money to recruit talents is related to the strategic plan implemented by Kissinger. In 2021, Intel showed its process technology and packaging technology roadmap to 2025, and said that it would catch up with TSMC and Samsung Electronics in the foundry field, and compete for the supremacy in key areas of chip manufacturing technology, not only to regain the CPU market share, but also Expand the market for GPUs. Intel's "ambition" is obvious, and having top talents has become an important cornerstone to support this "ambition". Although Intel did not make it clear who the seven locked companies are, it is not difficult to imagine that there will be chip foundry, GPU and other fields, or companies from Taiwan, China, and other international competitors.

Source: Intel official website
In order to develop the metaverse, Apple and Meta also spare no expense in terms of talent. Meta has hired about 100 engineers from Apple,media reported. Apple is giving out-of-cycle bonuses, ranging from $50,000 to $18 to engineers in chip design, hardware and some software and operations divisions, in the form of restricted stock to prevent employees from jumping to rival companies.
On the one hand, there are differences between foreign companies and domestic companies. Since most foreign companies lock their talents in the form of stocks, it is also possible for a senior executive or employee to come back when they change companies, because the equity is still there. However, in China, there are very few cases of returning to the company, and talents who jump out will basically choose to start a business. At the same time, in 2021, whether it is Intel, Apple or other major international manufacturers have achieved outstanding performance transcripts, it is said that in Q3 2021, Intel's total revenue is 18.1 billion US dollars, and Apple's total revenue has reached 81.4 billion US dollars. Internal employees Salary increases are also normal.
So, back to domestic companies, what are the factors that drive the salary of talents in the semiconductor industry to get higher and higher?
Why is the "robbing war" intensifying?
According to the data of BOSS direct recruitment, the average salary of chip talents in 2019 is 10,420 yuan. After two years of development, this number has doubled several times. Electronic Enthusiasts Network has learned that an engineer with an annual salary of 300,000 the previous year can earn an annual salary of 1.5 million after changing jobs three times. When one is alone, this is just an example, but under the wind, everyone can see the benefits, job-hopping and salary increases have become industry phenomena, and gradually affect the development of the entire semiconductor industry talent market.
There are three major reasons behind the rise in the salary of semiconductor talents.
First, under the background of favorable policies and rising market demand, the semiconductor industry has ushered in rapid development, attracting a large amount of capital to join. Statistics from the US semiconductor media show that in December 2021, a total of 54 startups around the world received financing, of which 40 were Chinese companies. For example, Jiangfeng Electronics plans to raise another 1.65 billion yuan to expand production, and Chichuang North has obtained over 6.5 billion yuan of E-round financing. With the addition of capital, the scale of the semiconductor industry has continued to expand, and the demand for talents has gradually increased.
Second, the speed of domestic substitution has accelerated, and domestic semiconductor companies such as Qixin Micro and Nano Core Micro have continued to rise. Top talents are very important for localization replacement, and the salary requirements are also very high. Previously, the news that the annual salary of a company's ISP chip director was as high as 1.8 million yuan also shocked the industry. Recruiting talents from foreign enterprises has become one of the methods to solve the shortage of high-end talents in domestic enterprises.
ERIC mentioned that the other side of localization substitution is the serious loss of personnel of foreign companies. For example, companies such as ADI and ST have encountered difficulties in recruiting people, which was unimaginable in the past. Data shows that there are basically no foreign companies in the top five companies by salary, and most foreign companies have gradually lost their competitiveness compared with domestic companies in terms of salary and benefits.
Third, the number of domestic semiconductor companies registered is increasing. According to the company’s data, in the first half of 2021 alone, there were 18,800 new chip-related companies, a year-on-year increase of 171.8%; the number of registrations in the same period last year was only 6,900. ERIC revealed that the number of new semiconductor companies in the past year is close to the number of semiconductor companies in the past five years. Businesses are increasing, but the growth of human resources has not kept pace with demand, resulting in an imbalance between supply and demand. In the recruitment market, it is normal for a master and doctoral graduate of the corresponding major to receive invitations from more than a dozen companies at the same time. 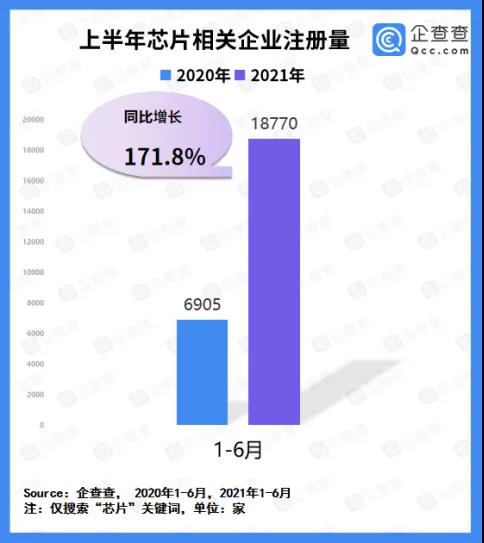 Source: Enterprise Check
The end of "involution" is "involution"?
At present, there are more start-up companies participating in the "people-snatching war" in China, while giants such as Xiangzhuoshengwei, Huada, and Zhaoyi Innovation rarely participate in the talent war. These companies have stable teams and can maintain stable salaries. Management formulation. Much of this has to do with the use of employee stock ownership as an incentive.
What is confusing is that semiconductor companies are not as long as Internet companies, with a long investment cycle and cannot achieve profitability in a short period of time, but they still attract many startups to join. In 2021, the most serious shortage of people is related to AI company positions such as DPU. In addition, with the development of the third-generation semiconductors, there is a demand for talents in the related industry chain. According to data from Career International, the average annual salary of Si/GaN new material R&D experts and IC process R&D experts in the chip field can reach 800,000 to 1.5 million. Yuan, the salary increase of job-hopping is as high as 50%. When the car track accelerates, the "talent war" in the automotive industry also follows. For example, the team members of the new car-making forces such as Xiaopeng and Weilai are from DJI, or giant companies such as HiSilicon, so CPU/GPU leads the way The annual salary of the characters is 1.5 million yuan to 6 million yuan.
The outbreak of the "talent war", does the advantages outweigh the disadvantages or the disadvantages outweigh the advantages?
ERIC believes that for the semiconductor industry, recruiting talents also shows that the company attaches great importance to the industry. At the same time, the country is also setting relevant standards by setting the first-level discipline of "Integrated Circuit Science and Engineering", so that future talents will be more suitable for the needs of enterprises. But on the other hand, whether the salary can match the technical strength also needs to draw a question mark. The expected salary of outstanding graduates has also become a common requirement of more than 100,000 to 200,000 yuan. "Compared with previous years, this year's school recruitment has presented great challenges."
The high salaries of graduates also have a certain impact on the senior employees with more seniority, so it has also caused the old employees to change jobs and raise their salaries. To a certain extent, this phenomenon has also become a "vicious circle". According to industry insiders, a candidate between the ages of 40 and 50 can see a salary increase of about 30% after switching from HiSilicon. ERIC also mentioned that different jobs have different age requirements. He recalled, "But in the past few years, it was difficult for applicants with a little older age to find a job." The candidate is Party A, and HR is the Party B has become another phenomenon in the human resources market.
Looking back at the semiconductor industry, do you really need so many chip companies? In 2018, when the first wave of AI chip companies arrived, people in the industry were excited, and the chip industry received attention. Today, more and more companies are joining the chip industry, and companies that have received attention have begun to "involute" to varying degrees. If you want to summarize the human resources market situation in the semiconductor industry in recent years, ERIC said that it cannot be summed up in one sentence.