Mass production next year! 4680 batteries are collectively bet by Tesla and CATL giants, and the energy storage industry has become a potential market

Mass production next year! 4680 batteries are collectively bet by Tesla and CATL giants, and the energy storage industry has become a potential market
4680 battery
In the context of global carbon neutrality, the electric vehicle industry has ushered in new opportunities for development. According to CleanTechnica's forecast, global electric vehicle sales will reach 7 million units in 2021. Mainland China, Japan, and the United States are the three major markets for electric vehicles. In order to promote industrial development, the US and Japanese governments have successively introduced policies related to electric vehicles. For example, the US government launched an "enhanced" electric vehicle purchase subsidy program. The Japanese government also stated that it would invest about 100 billion yen (877 million US dollars) as subsidies. , To support the construction of advanced electric vehicle battery factories.
With the support of favorable policies, relevant Japanese battery companies have increased their layout efforts. Recently, the news that Panasonic is preparing a production line for Tesla’s new-generation cylindrical battery 4680 has aroused the attention of the industry to the 4680 battery. What is more worth looking forward to is that the 4680 battery is not only used in the automotive field, but will also be used in the energy storage field in the future. Show your skills.

Source: Tesla Battery Day
4680 battery exposed sharp corners
Due to charging problems, electric vehicles are deeply anxious about endurance, and endurance anxiety will eventually become a "battery competition." Tesla bet the differentiated competition on the "4680" new battery. The 4680 battery, as the name suggests, is a cylindrical battery with a width of 46 mm and a length of 80 mm. It uses the non-electrode technology to improve safety in the form of "all-electrode" connection.
It is reported that compared with the 2170 battery previously used by Tesla, the battery cell capacity of the 4680 battery is 5 times that of the battery, which can increase the driving range of the corresponding model by 16%. According to Tesla’s estimates, the 4680 battery solution will reduce the cost of the 2170 battery by 14%. In addition, the cylindrical 4680 battery can use the CTC packaging solution to integrate the battery cell into the vehicle chassis. It is understood that this solution can save about 370 parts and the weight of the body can be reduced by 10%. On the whole, the excellent performance of the 4680 battery in energy density, cost, safety and other aspects is the main reason for the market's pursuit.
But the emergence of the 4680 battery is not only an upgrade in the size of 2170 to 4680, but a change in the technical route of electric vehicles. Electric vehicles mainly have two mainstream routes: ternary lithium batteries and lithium iron phosphate batteries, which can be divided into squares, soft packs, and cylinders.
Before this year, the ternary lithium battery has been used by most electric vehicles with high-pressure lithium iron phosphate batteries, and the ternary route is mainly adopted by overseas car companies. Ternary lithium batteries are further subdivided into NCM (nickel cobalt manganese) and NCA (nickel cobalt aluminum) routes. For example, Mercedes-Benz EQS and BMW ix3 use ternary NCM811 batteries, and Tesla uses ternary NCM811 batteries. It is a ternary NCA battery.
The "counter-attack" of the lithium iron phosphate battery technology route comes from the beginning of the Tesla Model 3 and Model Y standard version of the lithium iron phosphate battery. In October this year, Daimler Group stated that in order to save costs, in 2024- The new generation of Mercedes-Benz EQA/EQB released during 2025 will use lithium iron phosphate batteries. The battery company BYD has even introduced an upgraded version of lithium iron phosphate batteries-blade batteries, which are gradually being used in its Dynasty series of new energy vehicles. 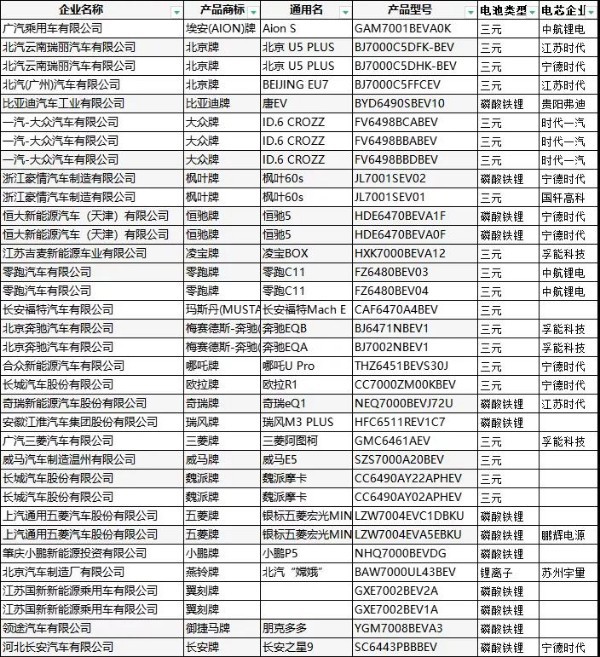 The 350th batch of "Announcement on Road Motor Vehicle Manufacturers and Products" passenger vehicles publicity (Source: Ministry of Industry and Information Technology)
Going back to the 4680 battery, because the 4680 battery is often used for comparison with the 2170 and other ternary batteries, it is classified as a ternary battery, but the industry believes that 4680 refers to the battery size, not the ternary lithium battery. With unique technology, as battery manufacturers invest in technology, it is possible to use 4680 batteries in lithium iron phosphate batteries in the future. This also means that the application direction of the 4680 battery has just revealed its sharp corners, and the future market space has yet to be tapped.
On the eve of 4680 battery mass production, battery companies have entered the track one after another
In the layout of the 4680 battery, Tesla and Panasonic have the closest cooperation. At the investor exchange meeting in the third quarter, Musk said that the first batch of Model Y equipped with the new 4680 battery will be delivered next year. At the same time, he said he hopes to be able to produce 5,000 of this model per week by the end of next year, ideally reaching 1 per week. Million vehicles. This large order prompted Panasonic to speed up the production schedule. In October this year, Panasonic disclosed the 4680 battery prototype developed for Tesla and stated that it will start trial production of the 4680 battery in Japan in March next year.
Judging from the ranking of global power battery installed capacity from January to September this year, Panasonic ranks third among global battery companies and is the leader among Japanese power battery manufacturers. In order to ensure Tesla's production capacity, in 2021, the Gigafactory, a joint venture plant between Panasonic and Tesla, plans to increase production capacity by 10% to 38-39GWh, and plans to establish a joint venture battery factory in Norway. In addition, since most of Tesla's market is in the Chinese market, Panasonic has also established a battery factory in China, and has reached cooperation with equipment suppliers such as Xiamen Tungsten New Energy, Beiterui, and Jiangsu Cathay Pacific.
Benefiting from the advantages of 4680 battery in terms of battery life and cost, not only Panasonic, but also many domestic and foreign battery companies have already seen the future market explosive power of 4680 battery. Guotai Junan stated that the current battery companies such as LG New Energy, Samsung SDI, CATL, Yiwei Lithium Energy, BAK Battery have set foot in the development of the Big Cylinder/4680 battery cell, and the head battery factory has joined the 4680 battery camp. 4680 is expected to become The mainstream model of cylindrical battery.
Panasonic, LG New Energy and CATL are Tesla’s three major cooperative manufacturers. In March of this year, LG stated that it has begun building a pilot production line for 4680 batteries and plans to start mass production by 2023 to supply Tesla’s factory. . CATL named the 4680 battery project "Golden Gu Bang".
It is worth noting that there have been reports that Tesla is looking for domestic 4680 large cylindrical battery cooperative manufacturers, including Yiwei Lithium Energy. The layout of Yiwei Lithium in the 4680 battery production line also confirms the authenticity of this news from the side. In November this year, at the groundbreaking ceremony of the Jingmen Power Energy Storage Battery Industrial Park, Liu Jincheng, Chairman of Yiwei Lithium Energy, said: “The large cylindrical battery project to be built in Jingmen may be the first mass-produced 4680 and 4680 batteries in the world. The 4695 battery production base, the batteries produced here will be equipped with the world's best company." The 20GWh large cylindrical battery project for passenger cars that landed this time is the 4680 and 4695 battery production lines. As early as September of this year, StoreDot, which cooperated with Yiwei Lithium Energy, announced that it had produced the first 4680 battery, which also laid the foundation for Yiwei Lithium’s 4680 battery business. 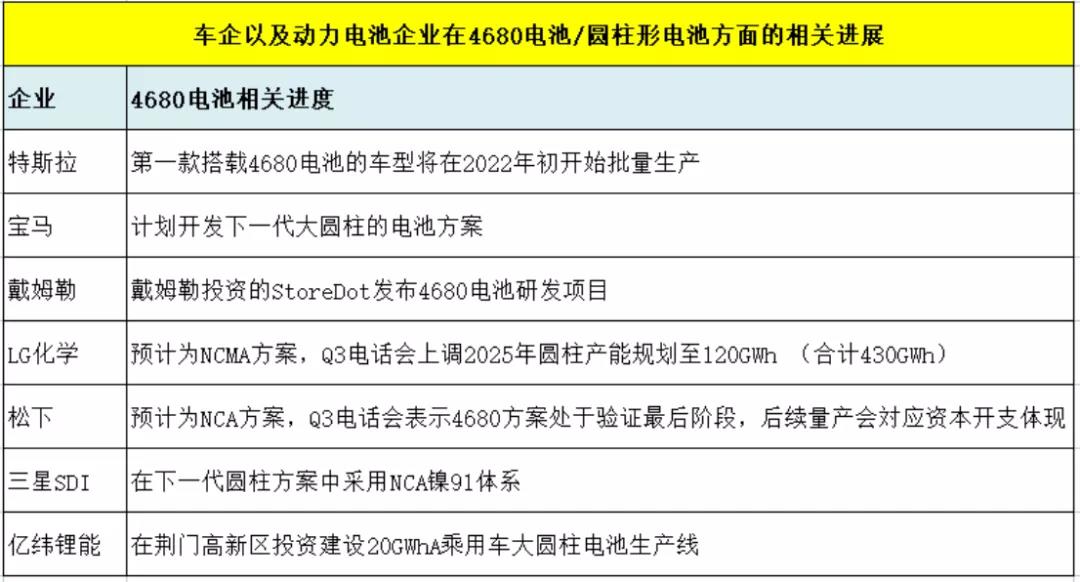 Source: Electronic enthusiasts sorted out according to public information
The automotive industry will not be the only direction for the 4680 battery
As an industry pioneer, Tesla has a "carrying effect" that other car companies do not have. It is not impossible whether the 4680 battery will bring about an industry revolution in the battery technology route of electric vehicles, but before mass production, all of this It's just a guess.
From the perspective of Musk’s market layout, Tesla will choose different technical routes based on market positioning. Industry insiders believe that after Model Y, Model S, Cybertruck and other models will continue to use 4680 batteries.
In addition to electric car batteries, Musk also revealed another important direction of the 4680 battery-energy storage. This year, Tesla applied for a patent for "difluorophosphate additive compound and its method for energy storage equipment". According to public information, the patent relates to improving the battery chemistry in energy storage equipment and will develop a The electrolyte is used to improve the performance of the battery while reducing its cost, which may be suitable for the 4680 battery. In addition, the domestic battery company Blue Lithium stated on the investor interaction platform that the 4680 battery can be used for energy storage.
As we all know, in addition to building rockets and cars, Musk’s other business is solar energy. According to foreign media reports, Musk has said that the installation of Tesla solar panels and Powerwall household energy storage batteries can increase the value of houses. And continue to promote solar energy business. So can the 4680 battery have a place in Musk’s solar business? From the perspective of Musk's entire industrial chain layout, this is not impossible.
According to reports, Tesla’s Powerwall energy storage power stations have been installed globally over 250,000. The equipment uses cylindrical lithium batteries as batteries with a capacity of 13.5kWh. It is worth mentioning that the Powerwall energy storage power station can be combined with Tesla's solar power roof to provide energy storage solutions for homes.
At present, Tesla has not yet announced the relevant application scenarios of the 4680 battery in the energy storage industry, but in the context of carbon neutrality, the energy storage market has become one of the directions for industry chain companies to bet.
For example, the "energy storage strategy" released by CATL is considered by the industry to be based on lithium iron phosphate batteries, because lithium iron phosphate batteries are the first choice for energy storage batteries, and they are also better than ternary lithium batteries in terms of cost. Huang Shilin, vice chairman of Ningde Times, once said: "Energy storage batteries have much higher requirements than power batteries. Now 1500-2000 cycles are enough to meet the requirements of passenger cars for power batteries, but the requirement for energy storage batteries is at least 8,000 cycles. "From this data, once the 4680 battery opens the energy storage market, it will get another leap.